One of the first projects or themes I find fun, simple and engaging is learning about Communities (2 weeks) and making a map as the culminating activity to end the unit. (For a total of 3 weeks on Community)

This week, I started by reading the class a book on maps I got on Amazon. The book was chunked over a period of 2 days to ensure understanding.


After the story, the students were shown real maps that I had saved from going on little road trips. We sat in a circle and talked about what we noticed on them. I had a few kids share out about a time they used a map with their family.


I also had some maps from the San Diego Zoo and and some play maps for kids from a teacher supply store. We watched a video on maps and models from the United Streaming's website. Our district purchased user licenses for all teachers to access their videos on our Promethean Boards.

I pulled out our old ELD song for communities from Rigby. The red car is on velcro and sticks to the different places in the community. So we fill in the sentence frames depending on where the car lands. 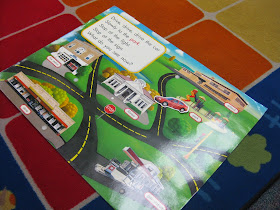 On Tuesday,  I read the last chunk of the Map book. Then, I pulled out our Writing Web for the power word "go." (The laminated web is from a district purchased program  called Learning Headquarters). I taught the sight words "go" under my own structure however as a part of this writing unit in my TPT Store called Rebus Writing using Sight Words. The word "go" is week 5 of the 8 week unit. With a pointer I pointed to the word web and we orally filled out each sentence frame from the word bank. 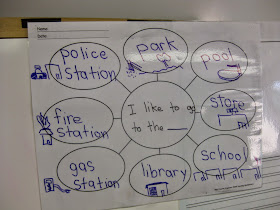 I allowed the kids to draw their own interpretation of a map on a half sheet of drawing paper as a pre-assessment to see where they are. Most kids drew standard pictures of places but some surprised me and had some streets and people walking in the map to different places.

On Wednesday,  I read them a book on map keys/legends.


I put up a class legend on the Promethean board that had four requirements. The sample legend was pre filled and colored and drawn and labeled. I asked the kids to draw a map on a full sized drawing page that had a: school, police station, neighborhood of homes, and a park. The symbol for each was a: building with flag next to it, building with a car next to it, triangles to symbolize a neighborhood, and a slide to symbolize the park.

I set the kids to work and could see them looking up and referencing the sample key as they drew their maps. I noticed an improvement in their pictures from the day before. Once all the required components from the class key were on their maps I passed out markers and let them fill in the blanks and put more detail in the map. I cut out small legends that were identical to the one I had on the board and had kids glue it on the corner of their map. They were allowed to take it home.

By Thursday, I brought out the colorful construction paper! 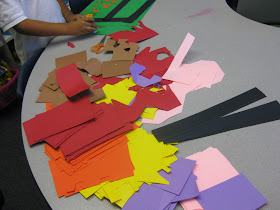 The neat piles of color coded paper soon got a little messy! I had pre cut them into squares or rectangles. The first to go was blue because everyone was required to put a body of water on their map somewhere. It could be a river, lake, ocean or backyard pool. Also, the black strips I precut were the first to go because those were the streets and kids were allowed to use up to four.

Children got right to work. They were so excited. Each map came out truly unique. As the kids were finished up I had them set up on the rug so the glue could dry and so kids who needed inspiration could come do a carousel walk around the rug and get ideas.

One of my late finishers added a church to her map even though we never discussed it. Cute!

The early finishers were doing literacy centers and reading books from the community tub. Building maps was a busy day. On Friday, I handed back their maps and a blank legend key. I asked them to make a legend for their map. Each was different.

I had them glue the legends on the back of their maps. I made them a word bank so they could copy. However, some were ready for inventive spelling and didn't need to reference it. If this were done at the end of Kindergarten I would not even offer a word bank on the board. I would ask all kids to use inventive spelling to fill out their legend.

If you'd like the free blackline master for the legend see the link at the bottom of this post.

IF I HAD IT TO DO OVER AGAIN... I would not have them glue the legends on the back of the maps. I would display it next to the maps because once I mounted them all on the wall I realized they were hidden. LOL! Oh well. Next year I'll have learned my lesson.

After reflection, I wouldn't have just had the kids draw on blank drawing paper. So I created these blackline masters as well. Enjoy!